fresh published travel books : True Tales of TWA Flight Attendants: Memoirs and Memories From the Golden Age of Flying: Kathy Kompare and Stephanie Johnson worked as flight attendants for TWA airlines for several decades, and they have plenty to say about their experience. In their new book, the authors as well as numerous other flight attendant contributors, share some of the most memorable moments from their time working for the airline. From near-death experiences to encounters with celebrities, these true-life stories are sure to entertain and engage readers.

Are you one of those people who get antsy on long flights? Staring out the window at the endless blue sky or the endless sea can be pretty boring. If you’re looking for a way to pass the time, check out True Tales of TWA Flight Attendants: Memoirs and Memories From the Golden Age of Flying (Telemachus Press, Oct 2022) a new book by former flight attendants Kathy Kompare and Stephanie Johnson.

For many people, the idea of being a flight attendant conjures up images of glamorous jet-setting and international adventures. And while it’s true that the job does have its perks, True Tales shows readers there’s a lot more to it than just sipping champagne in first class. Flight attendants are responsible for the safety and comfort of passengers, and they must be able to handle everything from minor inconveniences to major emergencies. The job of flight attendant is challenging and demanding, but it’s also exciting and rewarding. In recent years, shows like The Flight Attendant and Pan Am have done a great job of capturing the public’s imagination and giving people a glimpse into the fascinating world of aviation.

True Tales of TWA Flight Attendants is an interesting look into earlier air travel times. I enjoyed the mostly humorous stories of actual flight attendant experiences. The stories range in length from a single page to several pages. The writing styles vary widely, which makes total sense since this is a compilation of stories from many people. The book ends on a very somber note with several remembrances from the crash of TWA 800.

True Tales of TWA Flight Attendants will be available Oct 24, 2022 at bookstores everywhere, and would make an excellent gift for flight attendants (current and former), travelers, and those who are interested in the golden age of air travel.

From her first step onto the 747 taking her to Rome, Kathy Kompare knew she had made the right decision to join TWA. For 20 years of travel around the globe learning customs, languages, and the ins and outs of smooth travel, she relished her unusual career, taking full advantage of what each city or country could offer. Never a 9-5 person, and still not today, traveling for Trans World Airlines was a dream she is forever grateful for. True Tales of TWA Flight Attendants is her first book.

Stephanie Johnson flew for TWA for 23 years during the golden age of flying. She explored the world as a local, uncovering all the secrets of great shopping, wonderful places to dine, the sites to see and those fascinating little corners of the world. From London and Rome, to Munich and Madrid, and points east and west, she knew them better than the cities she lived in. She thanks TWA for the ride of a lifetime. True Tales of TWA Flight Attendants is her first book. 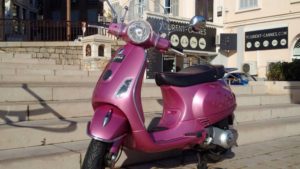